Gong Ting Jin Hao is regarded as the high grade of ripe pu-erh tea because of it consists a lot of tea buds. It's very limited because in making tea, each twig of tea leaf collected consist of 3 to 4 tea leaves and only 1 tea bud. Due to the present of tea buds, it shows a beautiful golden color. The tea liquor is silky soft, with smooth drinking sensation and no astringent or bitter taste.

This tea has been aged in Malaysia since 2018. It ages well and developed a dried fruity note like dates or figs.

Before we go into details about the Gong Ting Jin Hao ripe pu-erh tea, I would like to explain about two different types of ripe pu-erh in terms of the shape of tealeaf.

For instance, the reason why a mini tou cha has small and consistent leaf size is due to the grading. After the fermentation, the ripe pu-erh tea will be sifted and graded, and the finer tea leaves are usually used for the production of mini tuo cha. I often noticed some people associate the small leaves as inferior quality as they think it is broken or are cut leaves. However, this is a misunderstanding or myth-understanding. After the fermentation process, the same batch of pu-erh tea leaves is graded and the finer segments are gathered for making mini tuo cha. Thus, the quality of the mini tuo cha follows the same quality of the raw material used for the production of the same batch of ripe pu-erh tea, and it’s not of interior quality compared to the bigger leaves graded from the same batch. 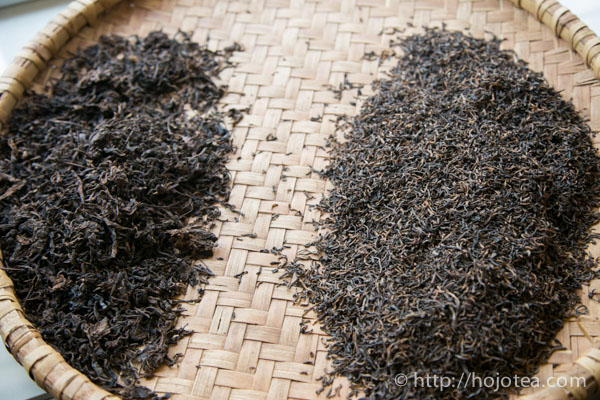 Classification of tea according to the size of tea leaves

From the grading process, the tea leaves are classified into tips, fine leaves, big leaves, stems and etc. Usually, there are 5 to 6 grades or sometimes even up to 10 grades where the highest grade contains the highest percentage of buds, and so it is called the Gong Ting pu-erh tea. Then, it is followed by the special grade, 1st grade, 3rd grade and so on. Thanks to the number of golden tips, the appearance of the Gong Ting grade is so gorgeous. Due to the very limited quantity of Gong Ting pu-erh, plus the very high demand, this grade holds the highest price. However, the grade of a ripe Pu-erh tea doesn’t reflect its quality but the cup characteristics. The quality is defined by the raw material used in making the ripe pu-erh tea.

The cup characteristics of the Gong Ting Pu-erh

The particular constituents in tea buds produce a very unique drinking feeling in taste. It is like snow melting in the mouth. Moreover, the taste is so gentle, delicate and soft which reminds me of raw chocolate. 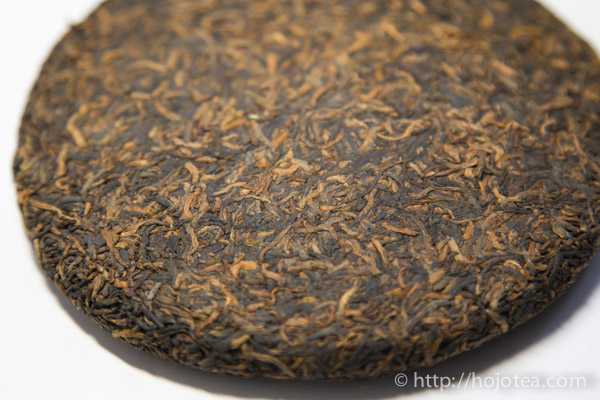 Because of tea consists of many buds, the body and aftertaste tends to be lighter compared to the full-grown leaves. Basically, there are no exceptions in this trend regardless of the type of tea. In my opinion, grading is done to classify the tea according to the character it emits. When tea consists of more full-grown and matured leaves, it gives more body and aftertaste with bolder drinking feeling, while the tea with plenty of buds is softer and tenderer.

As I’ve explained earlier, the ripe pu-erh tea is classified into various grades and the price for respective grade is different. However, this grading is conducted only among the same tea leaves. We should not get confused between this grading and the base quality of tea. If there are 100 types of pu-erh teas and all these teas were applied for the grading, there would be 100 types of Gong Ting pu-erh tea. The quality of each Gong Ting Pu-erh tea varies a lot depending on the quality of the raw material. It is very important to look for a quality tea before we talk about grading.

Tea is grown in a sustainable ecological environment.

This Gong Ting Jin Hao is made from old tea trees grown with natural farming method. It was grown as part of surrounding ecology and no fertilizers or pesticide was applied. As far as I am ascertain, most of the ripe Pu-erh tea originates from garden tea. With modern agricultural practice, the garden tea is usually well taken cared of. It is extremely rare for ripe Pu-erh teas that were originated from old tea trees grown under natural ecological environment to exist; therefore, these tea leaves can be sold at a higher price if it is processed into raw pu-erh tea. Hence, these good materials are seldom processed into ripe pu-erh tea. The garden tea tends to give a very light after taste and the flavour is less lasting. On the contrary, the tea grown with natural farming method produces a very strong aftertaste due to its extremely slow growing speed because of no fertilizer and pesticide is added. Furthermore, the tea will accumulate a lot of tea constituents like polyphenols and minerals from the soil as well. These factors will make tea taste become thicker and richer. 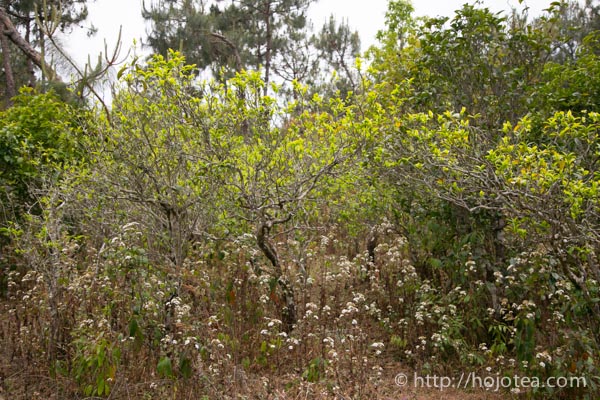